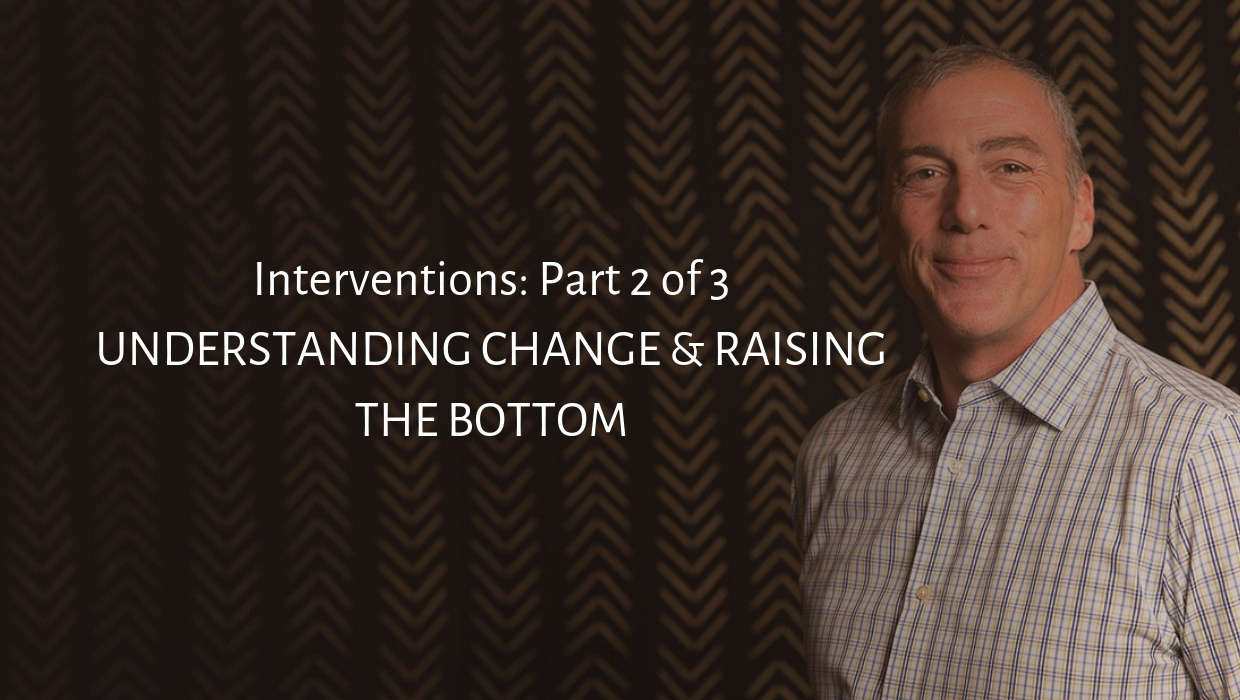 Interventions: A Series | Part 2 of 3

Understanding Change and Raising The Bottom

Must Substance Abusers lose nearly all before getting help?

Interventions must address the particular circumstances of each client who might enter treatment and no, not every user has to “hit bottom” for intervention and subsequent treatment to be effective. Occasionally an individual might “hit bottom,” however defined and seek treatment. Most users though arrive at treatment due to the mounting stressors that accumulate through the course of their substance abuse. Whether it’s familial pressure, legal difficulties, job loss, or hospitalization, some form of coercion is usually present. Furthermore, studies have shown that coerced clients often have better outcomes than those entering treatment voluntarily.

“Individuals differ in severity of use and readiness to change as well as their therapeutic needs, waiting for individuals ambivalence to be resolved is not the answer.” Click To Tweet

Despite dated paradigms, conventional wisdom, and tacit implications that popular culture continually reinforces, the options Intervention present to the user for treatment can resolve a user’s ambivalence to change at every stage of substance use. With the destruction and lethality of substance abuse reaching pandemic proportions, outdated thinking on Intervention and subsequent modalities of treatment can be as harmful as waiting on the sidelines as users struggle to hopefully become ready to effectively address their substance use.

Effective intervention accepts the inconsistencies users present in their readiness to address their substance use. Simultaneous and contradictory attitudes are integral in formulating the insights and subsequent decisions on a path to recovery. Human beings can be quite complex.

Families and loved ones have to embrace ambivalence as a normal part of the process of change. Most clients enter treatment with conflicted feelings surrounding their substance use.

It’s important to understand that at a minimum, the role of treatment is to resolve ambivalence and consolidate a client’s often fleeting sense of motivation Click To Tweet

Intervention is very much a process of being able to meet the client where they are at. When appropriate and possible, Mindel has shifted his style of Intervention. “I like to work with families collaboratively so that they can better understand recovery as a process versus an event.” In collaborative models, open discussions are facilitated about addiction and the prospect of recovery. Users and their families develop a mutual understanding of each other. Families come to more realistic terms of recognizing the path to recovery as a process and users begin to recognize the absolute need to respect healthy boundaries. This is a model in which the whole system learns simultaneously.

As the process continues, work arrives at learning what level of services the user is willing to engage in. “We have to be patient enough to allow individuals to engage in their own starting point of care,” says Mindel. “Often in my own practice, a client might prefer to begin in Outpatient Treatment. If they have difficulty succeeding at this level, they may become more amenable to Residential Treatment.” This model of intervention is a consistent and transparent discussion of commitments, setbacks, and ultimately progress.

To assess whether a collaborative model of intervention might be appropriate for you or your loved one. Please contact Adam Mindel

Schedule a 30-min consultation with Adam

Find out if we can help you raise the bottom 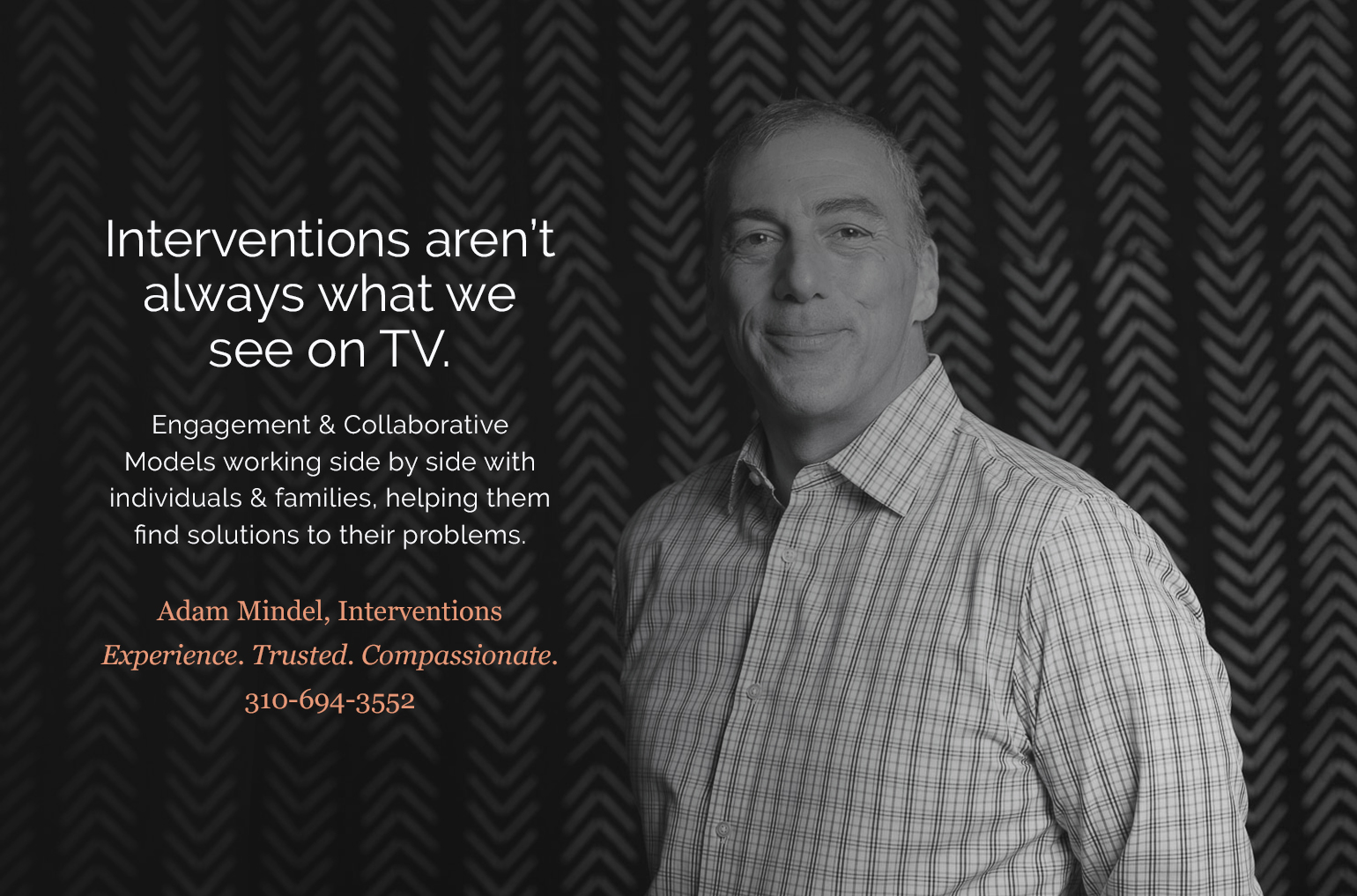 by Adam Mindel and Ben Goodman

and has been for quite some time. Part of this has to do with the success of the reality TV show bearing the title, but more importantly, it reflects the prevalence of substance abuse permeating modern life.

Common familiarity with intervention has been honed to the point of parody. Recall the Sopranos, where Christopher’s intervention for heroin abuse ends with a stomping by Ralphie and Paulie and a trip to the emergency room.

The scenario contrasts starkly from the ideal’s intervention aims for which are a reckoning within the substance abuser and the emergence of a path towards recovery for all concerned, user, family, loved ones. Intervention is the medium through which light breaks on the horizon and life can resume.

“Intervention is the medium through which light breaks on the horizon and life can resume.” Click To Tweet

A long-held notion within traditional recovery circles has been the idea that a user had to “hit bottom” before becoming vulnerable enough to accept or seek help.

Such a bottom was typically preceded by a downward spiral, decades-long, and a wake of despair. The proliferation of Alcoholics Anonymous as a viable means of treating addiction resulted in a foreseeable alternative as the book 12 Steps and 12 Traditions stated, “It was obviously necessary to raise the bottom the rest of us had to hit to the point where it would hit them.”

When Vernon Johnson was developing the initial model of intervention in the late Sixties and early Seventies, preventing the addict’s death was his chief concern. Seeking out the best approach in doing this, Johnson studied 200 recovering alcoholics attempting to answer the question, “What made them want to quit drinking?”

What he found was that the decision to quit was more a result of the impact of alcoholic illness reflected by tensions within the family and other close relationships than a bottoming out per se.

“What he found was that the decision to quit was more a result of the impact of alcoholic illness reflected by tensions within the family and other close relationships than a bottoming out per se.” Click To Tweet

Interventions have evolved over the years from Johnson Method to Invitational, Systemic, Engagement, and simply Collaborative models that work side by side with individuals and their families to harness family tensions and mobilize the power of love and attachment to create the essential willingness required for individuals to enter treatment. (next month’s blog will discuss different styles of intervention in depth)

The ensuing years, as it turns out, have seen intervention become the most promising means of raising the bottom for individuals suffering from the disease of addiction.  Adam Mindel, Program Director of Recover Integrity and Interventionist, is impassioned about raising the bottom. Adam states that with more than 72,000 overdose deaths including opiates and all drugs of abuse in 2017 we have no choice to but to “raise the bottom”. The old saying that each and every addict has to bottom out first is no longer relevant when there is such lethality.

According to The American Society of Addiction Medicine, Addiction is a primary, chronic disease of brain reward, motivation, memory, and related circuitry. Dysfunction in these circuits leads to characteristic biological, psychological, social and spiritual manifestations. This is reflected in an individual pathologically pursuing reward and/or relief by substance use and other behaviors.

if addiction is brain disease as described above by the chronic pathological seeking of substances, does it make sense for us as families and society to expect our addicted loved ones magically to wake up one day and separate… Click To Tweet

Therefore, if addiction is brain disease as described above by the chronic pathological seeking of substances, does it make sense for us as families and society to expect our addicted loved ones magically to wake up one day and separate themselves from the disease of addiction. Furthermore, if addiction is characterized by neurochemical, personality, cognitive and mood disturbances, we must recognize that many individuals have lost the ability to separate themselves from chronic use.

Adam describes a series of cases involving intervention with clients drinking themselves to the point which each of them required hospitalization, who were pathologically defended in accepting treatment due to changes in their personality as a result of neurochemical changes in the brain caused by alcoholism. Each of these client’s neurochemistry was so affected that they lost a degree of insight to the severity of their alcoholism and were operating on a day to day basis in “limbic survival like responses” which were servicing their alcoholism in either seeking alcohol or protecting continued use.

With the stakes this high, the question becomes not whether to intervene, but how and when to intervene on an addicted person.

Schedule a 30-min consultation with Adam

Find out if we can help you raise the bottom